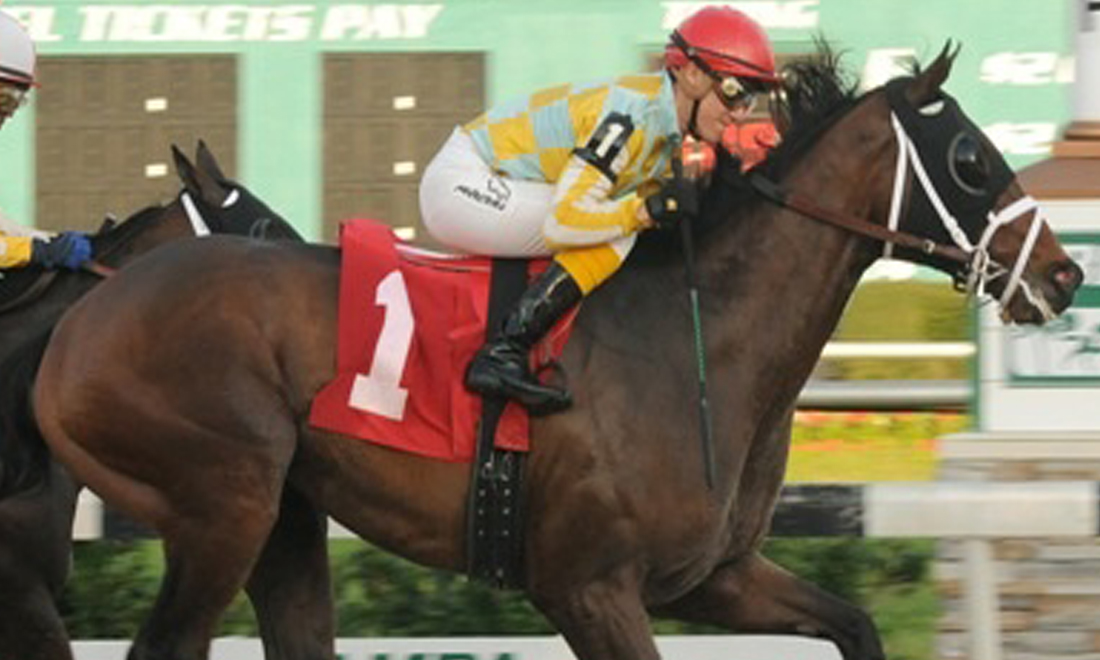 The Ontario-bred son of Sky Mesa was timed in 1:22.79, just .24 seconds off the stakes record, when pulling away to a three-quarter-length advantage with an impressive late surge after steadying over his stablemate’s heels in upper stretch.

Oxley and Casse teamed up in 2011 to win the Pasco with Prospective , a runner who used the 3-year-old prep series at Tampa Bay to make the 2011 Kentucky Derby Presented by Yum! Brands (gr. I) field. Prospective went on to win the Ohio Derby (gr. III) and the Delta Mile in 2012.

“I hope to see you guys a bunch,” the Canada-based conditioner said.

Under jockey Luis Contreras, Dynamic Sky stalked the pace for five furlongs as Mind Spell went a quarter in :22.70 and a half in :45.35 tracked by Divine Ambition. Sky Commander, who raced up close early, bid three wide on the turn and gained a short lead a furlong out under jockey Patrick Husbands. But Dynamic Sky was swinging four wide for clear racing room and unleashed the impressive kick that carried him to the front in time.

Contreras rode the winner confidently from post 2 and said he had few worries throughout.

“He broke well and I was able to wait behind the lead group getting to the turn,” he said. “When I swung out entering the stretch, he showed me a real run and he just kept on showing how good he is down the stretch.”

“I don’t know how much they helped,” Casse remarked. “He started his little thing turning for home where he wanted to lay in, but Luis was able to correct him. It was a big race. I was a little disappointed he got a little hot today, which he has to overcome if he is going to be a Derby horse. But it was hot today, so we’ll give him a pass.

“Sky Commander is a pretty decent horse, too,” Casse continued. “The time was definitely respectable, because Luis had nowhere to go and had to take him back and go around horses nearing the stretch. That cost him a little momentum, but he was able to overcome it.”

The Casse entry, off at odds of 3-5, returned $3.20, $3.40, and $2.20. Divine Ambition brought $5.20 to show, while O T B Bob, Mind Spell, Silver Day, Lightning Stone, and Hard to Name completed the order of finish. Morning-line favorite Purple Egg and Falling Sky were scratched.

Dynamic Sky, who ran second in the Dixiana Breeders’ Futurity (gr. I) at Keeneland last fall and was sixth in the Grey Goose Breeders’ Cup Juvenile (gr. I) at Santa Anita Park last time out, earned $30,000 for his second lifetime triumph, raising his career earnings to $248,115. He was bred by Arosa Farms out of the Distorted Humor mare Murani, and was purchased by Casse for $25,243 from the 2011 Canadian-bred yearling sale in Ontario when consigned by Hill ‘n’ Dale Sales Agency.