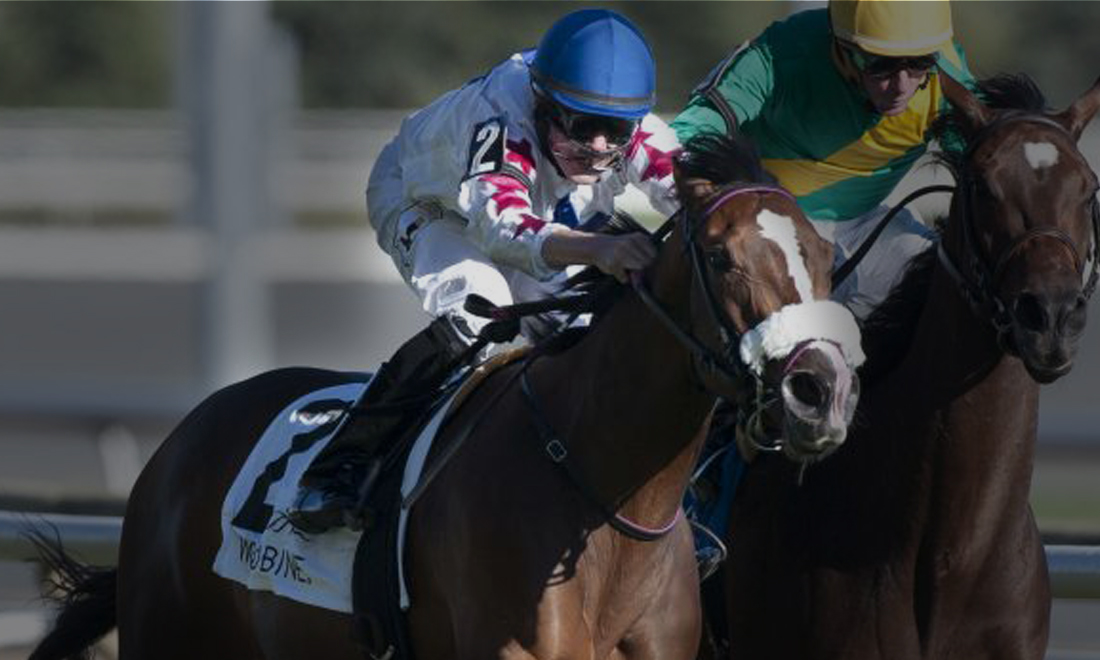 Robert Marzilli’s Caren, expertly handled by Jesse Campbell, made every pole a winning one to secure a nose score in Saturday’s $175,300 Grade 3 Ontario Colleen Stakes, at Woodbine.

Trained by Mike DePaulo, the Society’s Chairman bay, carrying high weight of 124 pounds in the field of nine sophomore fillies, was simply stubborn in the stretch run and refused to give way as Shake Down Baby tried in vain to reel her in.

Caren set the pace in the one-turn mile over the E.P. Taylor Turf Course as Thundering Sky and Calling Rhy Rhy stalked her early foot, while Ancient Secret, the 3-5 mutuel favourite off a win in the Grade 2 Lake George at Saratoga, raced from the back of the pack.

Campbell continued to set the tempo aboard Caren through the turn as Thundering Sky inched ever closer but the talented bay was always finding more.  With less than a furlong to run, Shake Down Baby, impressive winner of the La Prevoyante last time out, launched a menacing move up the rail under Gary Boulanger, but Caren, in hand under Campbell, found the wire in the nick of time for a first graded win.

The victory marked the eighth career score, and sixth in added-money events, for the hard-running Caren who competed in all three legs of the filly Triple Tiara finishing third in the Woodbine Oaks before taking both the Bison City and Wonder Where Stakes.

“This filly, she’s tough,” said Campbell. “She popped out of there running a little harder than I expected her to and I just went with it. I know her and I know she’s going to go down swinging.”

Campbell has guided the filly through all but one of her 13 career starts and was content to carry his crop for all but the final desperate strides. Caren covered the mile in 1:35.26.

“It’s tough for me to go all the way down the lane without taking the sword out,” said an emotional Campbell. “But when they give you that much…she’s a trip.”

Assistant trainer Josie DePaulo saddled Caren for the Ontario Colleen as her husband, trainer Mike DePaulo, was out of town to oversee Noholdingback Bear’s exciting score in the Grade 3 Gallant Bob Stakes, at Parx.  She was quick to acknowledge the special bond between rider and horse.

“You can tell he really respects the filly. She’s done everything he’s asked of her and he’s very attached,” said DePaulo.

Caren won five of six starts as a juvenile and has continued to improve in her sophomore season while stretching her high cruising speed out to 1 1/4-miles to win the turf Wonder Where Stakes on August 7. DePaulo noted her tenacious personality.

“She’s a very tough filly. She can be a little frisky and feeling good all the time. You’d think she was a colt if you got around her, but she’s eager to please. She has the biggest heart and she wants to do it,” said DePaulo.